Once again I am participating in Picture Me Reading‘s weekly meme Awesome Adaptations, about films that have been adapted to screen from books. This week’s theme is “An Awesomely Swashbuckling Adventure.” 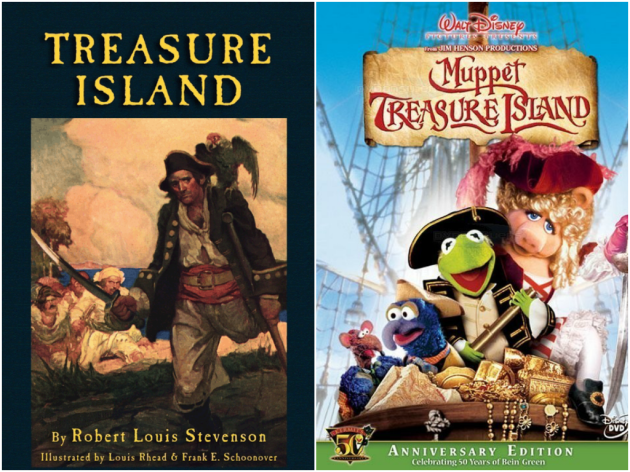 Confession: I have never read Treasure Island, and I’m sure the differences between it and Muppet Treasure Island are plentiful but, come on, how can you resist a Muppet adaptation of a classic?

Confession #2: I haven’t seen this movie in a pretty long time, like probably a decade or so. But I loved it when I did see it and it has Tim Curry so… hopefully I would still like it?

The story focuses on an orphan boy named Jim Hawkins who has always longed for nautical adventures and finds himself on such, but unfortunately gets caught up with pirates.

Including Long John Silver, played by Tim Curry. There’s danger and such, but of course it ends well for Jim Hawkins and the other good guys.

Here’s the one song I do remember from the movie:

Also, while looking for pictures of the movie, I discovered that there was a TV movie of Treasure Island that featured a young Christian Bale! What?! Must see!

Can you think of another swashbuckling adaptation from book to film?