Are you guys ready to become Trekkies?! I know you are! 😉

So I worked very hard on this flowchart in Excel to help guide you in starting you venture with Star Trek. Turns out converting it to any sort of viable picture if a complete pain in the butt. The following was the best I could do, and if you click on the picture, you can see it in a much more decent (i.e. readable) size:

However, the top part of the chart was cut off. If you click on the link to the Excel file on Google drive (you’ll have to do maximum zoom to be able to read it) you can see the top, but I think the size is about the same as clicking on the image above. So my apologies I could not do better! I promise it looked nice in Excel!

The first question on top is supposed to be “How do you feel about science fiction?” and your two options are: “I enjoy Star Wars and other science fiction” and “I am uncertain about science fiction.” Now, I am going ahead and say that even though I think more of you would like Star Trek than you realize, I also fully recognize it is NOT for everyone. If you watch a few of these episodes and still find yourself saying “meh,” you probably won’t like the show overall. Some (but not all) of the episodes included on the chart are universally claimed by fans to be some of the best, so if you don’t like something we consider to be the best in the series, you’re probably not going to like the rest of it either. Star Trek does include a lot of “technobabble” (difficult and probably made up talk about science fiction-y things), space battles, and aliens, but it also includes a close look at humanity, philosophy, and characters. However, if you trust my judgment on anything and the idea of a space-based show doesn’t totally weird you out, I think you should at least try out a few episodes (all episodes available for streaming on Netflix or at startrek.com) and see what you think.

I was originally going to divide my chart based on people’s perceived ideas on Star Trek, but really I kept hearing the same thing: “Star Trek looks dated, hokey, and/or cheesy.”

I can understand these concerns, as they were probably mine as well when I first started watching. The original series was filmed in the 60s, and it has it share of cheese at times, but some of the episodes are also really good and full of meaning. Yes, it was obviously filmed in the 60s, but if you can get past that and enjoy the story, I think you’ll be glad you did. The series was actually culturally groundbreaking in many ways.

The Next Generation might be the most beloved of the series, and it (especially the early seasons) is so clearly from the 80s. Again, once you get past the look, you can really enjoy what the episodes have to offer.

If you’re familiar with Wil Wheaton/Wesley Crusher, here he is looking 80s-tastic in one episode. He was more commonly seen in uniform or in ugly 80s sweaters.

I think once you get to Deep Space Nine, Voyager, and definitely Enterprise, you see a lot less of the hokey-looking stuff. And of course, I think the new J.J. movies look slick and can be a nice introduction to Trek if you’re thinking about whether or not you want to delve into the deeper waters of the TV shows.

If I was told you could only watch two episodes of Star Trek to give you the scope of what it stands for, I would go with the fun and quirky Star Trek original series episode “The Trouble With Tribbles” and the Deep Space Nine episode “In the Pale Moonlight.” The latter is my absolute favorite of all Trek and I almost would hate to give it away out of the gate, but at the same time I would hate for anyone to judge the series without having seen it. The funny thing about me liking this episode so much is that the creator of Star Trek, Gene Roddenberry, was probably rolling in his grave when it aired.

You see, Gene Roddenberry had a vision of the future that was a utopia, at least for Earth and its allies within the Federation. They were clearly the good guys, they did all the right things, period. But we know things aren’t that clear cut in real life. The reason why I love Deep Space Nine so much is because it shows the dirty underbelly of what happens when good people find themselves in desperate circumstances. The series contains amazing character story arcs, and this sixth season episode is a big turning point for Captain Benjamin Sisko.

“The Trouble With Tribbles” is the exact opposite of “In The Pale Moonlight.” It’s light and fun but also a favorite among Star Trek fans. Deep Space Nine paid a wonderful homage to the episode with their episode “Trials and Tribble-ations,” but you should see the original first. What can you not love about an endless number of furry, cooing space animals?

So if you’re interested in trying Trek out, open the chart and follow the statements that most apply to you. Watch the episodes. When you’re finished with them, if you enjoyed them, try out another statement and those episodes, and try that for as long as you want. Then if you’re ready for more, you can try the new movies, or start from the beginning of the series that seems the most interesting to you, and go from there.

If you want, you can go with the order the shows were created, which would obviously mean begin with The Original Series (TOS). As mentioned before, you have to remember that this show was created in the 1960s and can be hokey at times, but there are plenty of episodes that show depth. It’s also only three seasons, a light commitment compared to all of the other series (not including The Animated Series… but we’re not talking about it today). It also has a few movies. 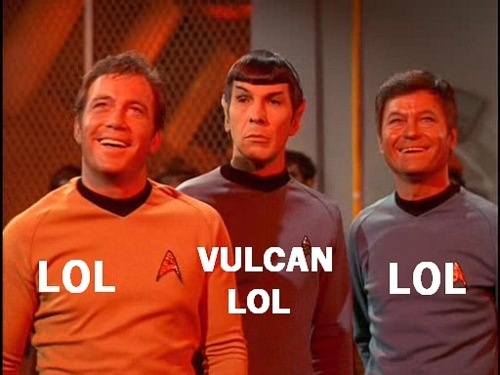 You could also start with the chronological beginning, which would be Enterprise (ENT). The first season is not the best and the finale of the show is the worst episode of Star Trek ever, but it does pick up after a time and has a really interesting and intense story arc that pretty much takes up the third season of the show. It has four seasons overall.

If you are looking for quintessential Star Trek, that can be light-hearted or deep, but was better produced than the original series, check out Voyager (VOY). Its pilot might be the best in all of Star Trek. It has seven seasons and is the favorite of Kelley’s from Another Novel Read.

If you like philosophy and psychology, you might enjoy starting with The Next Generation (TNG), but you will have to patient and forgive the first season or two. After that though, it’s quite enjoyable! It has seven seasons and a few movies. 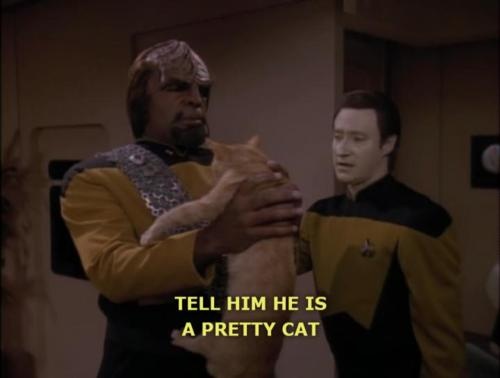 And then if you love continuing story and character arcs and stories that really make you think, Deep Space Nine (DS9) might be a good place for you to start. It is the best developed series of Trek, in my opinion, and really starts kicking late in the second season. Its finale is probably my favorite of all the series. It’s also known for being the “darkest” of the Treks, but I think it also has some of the most fun episodes as well. It also has seven seasons.

And Tweet me anytime (@acps927) if you have a question about Trek! I will recommend episodes, movies, podcasts, or answer general questions you may have (unless they deal with spoilers… then I’ll make you find out on your own!).

Being a Star Trek fan is a lot of fun. It’s a culture of its own. We love the best episodes and love to hate the worst. It will undoubtedly take some time to understand the difference between a Vulcan and a Romulan or to get used to certain things, but in the end, I think it’s worth it and quite a fun ride.

Are you going to give Trek a try? Let me know if I’ve piqued your interest or if you have more questions!

19 thoughts on “Your Star Trek Introduction”