Overall, I liked These Broken Stars, but I’m afraid the hype monster got me on this one. I expected it to be truly epic, but… it fell a little short for me. 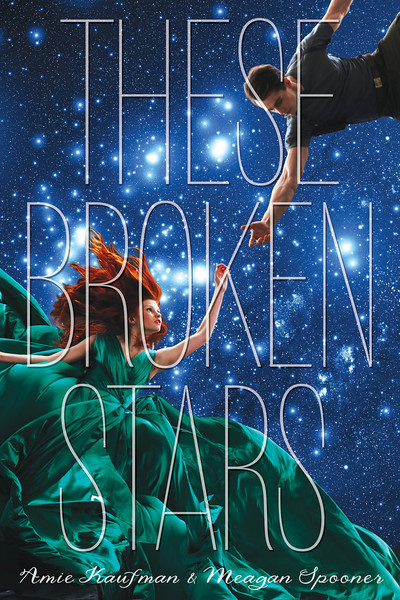 What I really enjoyed from this book…

– I loved the Icarus and I really wish we could have had more time there! It sounded so interesting, and I would have loved to learn more about the in’s and out’s of the ship, seen more parties and experienced the observation deck. It all sounded so neat! I liked what details we got of the ship.

– I also liked any details we got of this world, and the world itself is honestly what makes me most interested in reading the next book Spooner and Kaufman produce from this universe. I’m curious to know more about the war (which I think the next book is focusing on) and how we discovered all these other planets. (And are there aliens? It didn’t seem like there were.)

– The sci-fi aspect that comes up on the planet was intriguing and felt like something that could be on an episode of Star Trek (pretty much always a good thing!).

What I did not enjoy as much…

– While I believed in Lilac and Tarver’s attraction and affections for one another, I did not believe in the depth of their supposed epic love. They went from not standing one another (but being attracted to each other) to admitting feelings, which made sense, but they were willing to completely abandon their families to stay together forever on the God-forsaken planet. Of course, I guess hormones are to blame for that.

– As they started their trek across the planet and Lilac was being whiny, I thought, Oh no, it’s Under the Never Sky all over again…

But I liked the characters slightly more so I decided to stick with it. But that being said, I don’t think I’m a huge fan of survivalist stories. All this walking around a barren or foreboding place with so little to do or say doesn’t really suit me unless I LOVE the characters.

What I wish we could have seen…

(These are vague inclinations about the ending here… I don’t think it’s too spoilery, but none of this will really make sense if you haven’t read the book yet)

– I wish the book had ended with Lilac and Tarver going to Tarver’s parents’ house. The ending as it was was interesting, but I think this would have been a nice final scene. I’m also upset we didn’t get to learn more about the planet, but I understand why the mystery is left as it is at the end.

– I wish we could have gotten more insight into Lilac’s medical test results.

– I wish there had been an explanation as to why people avoided Lilac at the beginning of the book. Did I miss something? Was it JUST because of who her dad was? No one knew what had happened with Simon except her and her dad. And why does she need Anna as a bodyguard? I never felt like these things were fully explained.

There were moments that I was engaged and interested, and moments where I was slightly annoyed. I liked Lilac and Tarver fine, enough to care for their well-being, but I don’t care too much about what happens to them beyond the story and I don’t care about their relationship too much. I wish there had been more of the science fiction elements and the ship, less of the boring trekking across the planet (though I understand the realistic nature of how long that could take), and that the relationship had developed more naturally.

What were your thoughts on These Broken Stars?

9 thoughts on “Review: These Broken Stars”