Several people have talked about what they would like to see in the “New Adult” genre that is gaining in popularity, and I thought I would share my thoughts.

I’m 27 years old. I don’t have a problem with reading about teens who are 10+ years younger than me, clearly, but sometimes I want to read about people closer to my age. But I don’t want to read about people’s sex lives, which is what most New Adult seems to be primarily focused on. I love a lot of things about YA literature, but if a book is about a whiny 14 year old I’m not as interested. I like books I can relate to, and I can relate to a 22 year old trying to figure out her life, because 5 short years ago (seriously, it feels like it was yesterday), that was me. Sometimes that’s still me, just older.

I love the movie Mr. Magorium’s Wonder Emporium, and I think it’s grossly underrated and under-appreciated. When I first saw it, it was just pure fun, a fantastical story about a magical toy store and the people affected by it. But at some point when I rewatched it, I came upon a realization: I was Molly Mahoney. Molly Mahoney is the character played by Natalie Portman, who I would argue is the center of the story even if it is called Mr. Magorium‘s Wonder Emporium. She’s 23 and has graduated from college, but is still working at a toy store while she dreams of becoming a great composer. Mr. Magorium, played by Dustin Hoffman, encourages her dream by always asking how her masterpiece is coming along. 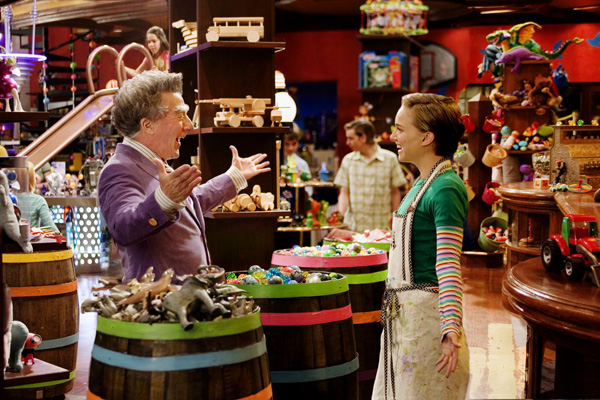 Then he announces that he’s leaving, essentially, that he’s about to die and leave the Earth. Since he’s in perfectly good health this leads Molly to believe that he has gone delusional in some way and is determined to convince him that he is not dying. But the truth of the matter is that, by some magical way that Mr. Magorium is capable of doing, he is choosing to leave the Earth after a good, long life, and he wants to leave his store to Molly. He hires an accountant (who ends up being referred to as “the counting mutant”) to get everything in order before he leaves the store to Molly. She is overwhelmed and quite insistent that she can’t run his store, because she’s not magical like him.

I want to switch gears for a minute to talk about Henry, “The Mutant,” but I’ll get back to Molly. I’m married to an accountant, and my husband and Henry are pretty much one in the same. They are realistic and like having all their ducks in a row. Henry needs Molly to grow, because he struggles to see past numbers and order. Molly needs Henry to grow because she needs the perspective of someone who is practical but can also see the “spark” in her, that she is capable of more than she realizes. I love it when he tells Molly, “You know, some people… send flowers, or cards, or… give people hugs. I… make sure their paperwork’s all in order. I thought I’d try something different,” as he sees her struggle with Mr. Magorium leaving.

At the end of the movie, Molly has grown and changed, closer to fully realizing what all she is capable of. For most of us, it’s not quite as magical and exciting, and we may never feel quite as fulfilled as Molly seems to at the end of the movie, but it’s a fictional story and perhaps somewhat glamorized version of what many of us go through as twenty-somethings. I may not feel like Molly Mahoney at the end of the movie now, but I can certainly see change from the past five years, change towards something more positive and fulfilling as I work towards my goal to became an author. And even if I reach that goal it doesn’t mean everything will fall into place and be perfect, because it won’t. Life is a continuous struggle. But there’s also a lot of beauty in the journey, and we discover it with others around us with different gifts, like Molly and Henry.

I haven’t actually read any books labeled as New Adult yet, so I might be off base in assuming they’re not like Molly’s story, but I have been lead to believe they’re not. It doesn’t have to be so fantastical and “rated G” like Mr. Magorium, but something that focuses on the struggle you face as a young adult of trying out who you are, not who you are in bed, but what your strengths are, which friends in your life are your true friends, etc.

Perhaps the young adult genre could merely expand to include stories of the slightly older young adults, rather than breaking off into this whole other genre. I don’t know what the best way to market all this would be. But I think a lot of people would be able to relate to this sort of story. I know the not-too-much-younger me craved it. I would have written if I had any clue how to at the time. Maybe that’s part of the problem, is not knowing how it’ll end realistically. Because in real life, the process never truly ends.

If you’re interested in someone’s thoughts about what might be wrong with the New Adult genre, check out this article from The Huffington Post, “The Problem with New Adult Books.”

What do you think about stories about struggling twenty-somethings? Is this something you would like to see? Or have you seen it before and I’ve missed it?

23 thoughts on “What the New Adult Genre Could Learn from Mr. Magorium”