As unlikely as it seems, amidst Harry Potter and my other fantasy reads, I actually picked up a YA contemporary, Magnolia by Kristi Cook. 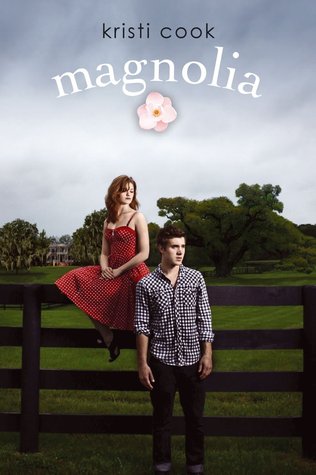 – This book it set in the South! I was born in Mississippi and while I did not live there long, I have family who lives there and I have gone back many times throughout my life. I understood several of their local references, and I also liked the nods to other places in the South that I could relate to, especially when they talked about Houston and things that they did there.

– There were Star Trek references! If you know me, you know that’s a complete win right there. Of course, knowing about said references ahead of time helped me move this contemporary up my TBR list. I was amused that the cats’ names were Spock, Kirk, and Sulu. Though the latter really should have been McCoy, but oh well.

– I mostly liked the story and romance and got caught up in it, but there were issues with it that I will delve into further…

– How the romance ended up. I was all aboard for these two getting together, but I didn’t like how they hid everything from their parents, and were making out and probably more in each others’ rooms for who knows how long without their parents even knowing. I understood why they wanted to keep it a secret at first, like those first few days or a week, but six weeks later and it’s still a secret! When are you going to announce it? When you’re engaged, you’ve eloped, when you kids? When does it end?! Just fess up and let them have their happy dance, and let them be involved in your relationship. I know that sounds weird and old-fashioned of me, and I’m not talking some Duggar-style courtship here, but I think it’s good, at that age, to have some parental involvement, especially under their circumstances where they are already all friends. Also…

– Are their parents that dumb?! Six weeks of hiding their relationship and none of these four intelligent, grown-up people haven’t figured it out? I don’t buy that for two seconds.

– The pacing of their story. So, Jemma has hated Ryder since 8th grade. Senior year, she finally admits when it started, and it felt strangely unnatural, like this would have come up in conversation before. I mean, what have they been talking about for five years when her hatred of him comes up? When she talks about what happened at the dance, it honestly feels to me like this was something that happened 6 months ago, a year tops, not like it happened five years ago.

– In my opinion, there’s too much swearing, and let me explain myself on this because I know I’m more sensitive to this than most. Ryder is portrayed as being such a good guy (he doesn’t drink… but apparently he drops the f-bomb?) and he and Jemma are both raised by well-behaved Southern ladies. I’m not saying they wouldn’t swear at all… I live among people from these kinds of families and I know they do, but I think about a quarter of the swearing would have felt more appropriate. Some of it felt forced, like it was just thrown-in there just to prove these are red-blooded American teenagers.

– There are not enough Star Trek reference or of Jemma’s dad (who is where the Star Trek references really come from anyway)! OK, I admit, this probably would not be a complaint if Debby’s review of this book talking about this aspect of the novel had not sold me on bumping it up my TBR. But I wanted more! And I loved what little we got with Jemma’s dad; he seemed really cool.

– Seriously, two kids from Mississippi are going to go to schools in New York that they haven’t even visited? I appreciated all the sentiment about following your dreams and all that jazz, but this felt like too much of a stretch to me. We never even got resolution that Jemma’s parents could afford NYU. I think these kids are in for a rude wake-up call. (Man I sound so old right now, ha ha.) Jemma’s mom has not even researched NYU enough to know that the campus is sprawled out rather than traditionally more enclosed. Really?

– The Romeo & Juliet parallels felt pointless and really didn’t work for me. There’s the basic premise about the families, except it’s opposite from Romeo & Juliet because the families love each other and want to be united in marriage. But we have Ryder, who has an R name, and Jemma, who has a J name. There’s a character named Rosie (think Rosaline), and I think there might be someone with the last name Montague? There were probably more I missed, but anyway, it didn’t do anything for me.

This was pretty much a 4 star book until the ending kind of made it feel a little weak overall to me. Final rating: 3.5 stars.

What are your thoughts on Magnolia? Also, be on the lookout because I plan to do a Bookish Wedding Inspiration post based on Magnolia in the next couple of weeks!