I’m really glad I decided to pick up this series again in preparation for the last movie (so sad!). When I read the trilogy for the first time in 2012, none of the movies had come out yet (though they had been cast). My only spoiler was that I had heard one of the male characters died, and I was so worried the whole time it was going to be Peeta (I realized later the reference was to Finnick). I adored him and wanted what was best for him, so I spent all of Mockingjay SO STRESSED. But this time, I was able to appreciate Katniss’ journey even more (though I liked her a lot in my first read too, obviously, since I named my blog after her)..

The first read of the series, for me, was all about the characters. This second time around, it was about the overall story, particularly its themes of war and PTSD. 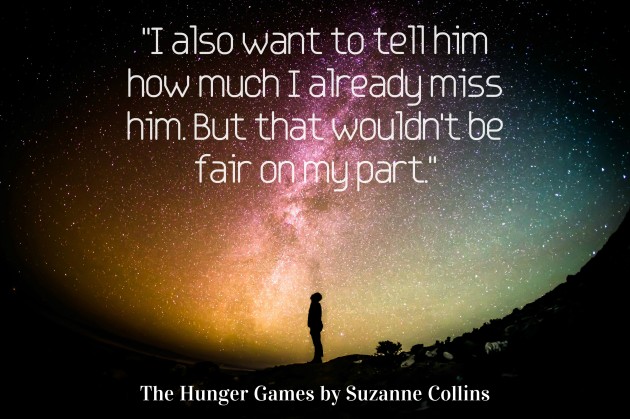 In my initial read, The Hunger Games was my favorite read of the trilogy. After rereading, I think Catching Fire might actually be my new favorite, but I will not deny that this is most likely influenced by the movie, as it is also my favorite of the movies (which I can say for certain now that I have seen Mockingjay Part Two). The nice thing about Catching Fire is that we already know the main characters and the world, but we get some new secondary characters and we delve deeper into what leads to the rebellion. Also, Katniss’s interactions with Peeta are more genuine.

The first time I read Mockingjay, I pretty much hated it until the last page before the epilogue. The pacing seemed off and I was so concerned about poor Peeta’s state. This time, I was more relaxed and able to appreciate the book more, but at the end I was amazed that despite the fact that Katniss and Peeta end up together and even have a family, the whole thing still feels downright tragic. Not in a hopeless way, otherwise I wouldn’t care for these books the same way, but she loses her sister, her mother, her best friend, basically loses her mentor, and several others in her life – some through death and some due to purposeful distance (or in the case of Haymitch, he continues to lose himself to the bottle). No one comes out of this in good shape, and that’s scary. But sometimes, that’s real life. But we see that good can still come out of it.

I know not everyone loved the first Mockingjay movie, but I have a deep appreciation for it, and my feelings are the same for the second one. They’re hard movies because we see Katniss struggling so much, see the dirty underbelly of war, see the horrors of manipulation and PTSD. And I appreciated some of the changes they made in the films, few as they were.

In the final Mockingjay installment, we get a little more closure with Effie. Haymitch seems to be in at least a slighter better state than he did in the book. And in the scene where Katniss asks Gale about the bombs, you know with certainty when she says, “Goodbye Gale,” she means goodbye forever. That hit me much harder than his sudden disappearance in the book.

And after everything has gone down and she returns to Twelve, we get the scene with Buttercup and then we see little flashes of her starting her life over again. I actually would have liked more of this, but the movie was already bordering on too long of an ending (due to staying faithful to the book in so many ways, I might add) so I forgive it. Katniss hunts, Peeta returns, and they start to spend time together. And at the very end they have apparently ended up in the same house, because she leaves her bed to come into his room to crawl into bed with him. I was a little sad we didn’t get one more kiss when she finally admits she loves him, but it was sweet nonetheless.

Neither the books nor the movies pulled any punches, but I think that is a large reason why this is a story that will continue to endure. It carries themes and warnings that we can all take to heart.

What are your thoughts on the last Hunger Games movie, or the books and movies in general?

6 thoughts on “My Feels for The Hunger Games Are REAL: My THG Reread & Mockingjay Part 2 Review”