To review this movie without giving away any serious spoilers would be difficult at best. So let me say what I can first…

I laughed and I cried.

This movie is largely about Kirk’s development as a character.

Karl Urban as Dr. McCoy is still my (and my husband’s) favorite character in the reboot universe, as he was in the 2009 movie.

You can enjoy this movie with limited Star Trek exposure (you should probably at least see the 2009 film), but the more Star Trek you have seen, the more you will appreciate the movie. And if you do enjoy J.J. Abrams’ Trek films, you should really go back and watch the original source. It’s not as polished and sometimes it’s hokey, but the heart is there, and you can more fully grasp the meaning of what happened in this film.

And let me warn you, I’m about to get super Star Trek nerdy.

Now for the spoilers! I have whited out the spoilers so you can scroll down to comment without fear if you’re not ready, so highlight the white parts to read if you are ready. (Also, any links you click on will contain spoilers for various series in the Star Trek universe and other movies, so do so at your own risk!)

Comparisons to the Original Source

So there was a lot of talk about John Harrison when he was announced as the villain. Even before, it was widely speculated that he was actually Khan, who long-time Trekkies know from The Original Series episode “Space Seed,” and the movie Star Trek II: Wrath of Khan (Wait, this wasn’t Star Trek 2? No it wasn’t! In fact, it’s the 12th Star Trek movie.) Some believed it, some didn’t. Most of the time, I was in the camp who believed he wasn’t. I mean, Benedict Cumberbatch looks nothing like Khan! (Click here for a picture reference) I thought I would be disappointed if he was Khan. But I also wanted to keep an open mind.

When watching the movie, probably about ten minutes in there was a dead giveaway for me that Harrison was either Khan or involved with augments somehow (if you don’t know what augments are, your homework is the aforementioned “Space Seed,” as well as the Star Trek: Enterprise episodes “Borderland,” “Cold Station 12,” and “The Augments), and that was when he told that man that he could save his daughter’s life. Genetic engineering was clearly involved.

I also nearly cheered aloud when Section 31 was mentioned (Your homework to learn more about Section 31 is the Star Trek: Deep Space Nine episodes “Inquisition,” “Inter Arma Enim Silent Leges,” “When It Rains…,” “Tacking Into the Wind,” and “Extreme Measures,” as well as Enterprise episodes: “Affliction,” “Divergence,” “Demons,” “Terra Prime.” (Those these episodes will make more sense and mean more if you watch the entire series, so essentially I’m telling you to watch everything. 🙂 )), and am glad that brought it up. I think Section 31 is a great element of the Star Trek universe because it shows a darker underbelly of the Federation and that it’s not perfect (I know Gene Rodenberry is rolling in his grave as I type this, but it’s true). Though I found it odd they didn’t debrief Kirk and crew about how they shouldn’t mention to anyone ever. Hmmm…

I decided to embrace Cumberbatch’s character as Khan while watching the movie. And then when Kirk went into that radiation zone, I once again knew what was going to happen…

Seriously, you need to watch Wrath of Khan.

Kirk was going to die. Spock was going to see him die. It would be the reversal of The Wrath of Khan, where Spock died it Kirk had to watch. And I was stunned that J.J. was actually doing this! Was is a rip-off or an homage? I mean, this is a alternate timeline, so I suppose a lot of it can play out similarly yet different (but don’t get me started on how different the uniforms and interior ship designs are and yet most of the Enterprise crew is the same… I’ve always had a problem believing alternate reality stories. But anyway, tangent over…). But I was crying in the theater, tears rolling down my cheeks, as I watched the scene between Kirk and Spock as Kirk died play out. So I accepted it. (By the way, to see a comparison between the death scenes in this movie and in Wrath of Khan, click here.) I decided I really appreciated most of what J.J. portrayed in this movie with this timeline, borrowing from original elements that Trekkies already know and love. 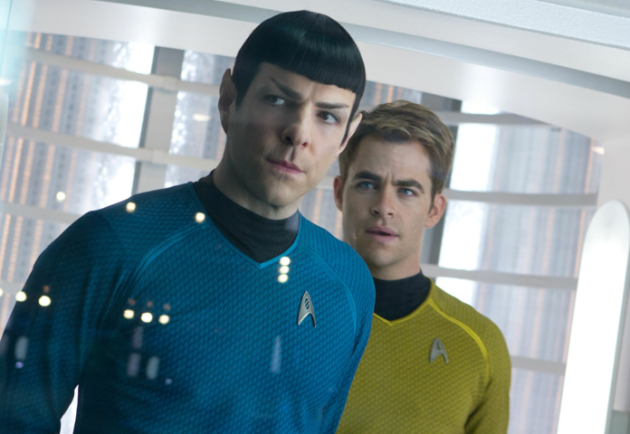 I thought the film did a good job in continuing Kirk and Spock’s relationship as we saw how it was set up in the 2009 film. Though Spock is half human, he generally chooses his Vulcan side, which drives Kirk, who is very much human, crazy, but he also has a lot of respect for Spock. And though Spock doesn’t always show it or even always know if himself, he has a lot of respect for Kirk. I think the death scene was so poignant for me because of how well-developed this relationship was in J.J.’s version of Trek, because when I cried, I cried for these characters, not the original ones. BUT I also think the background I have with the original ones certainly added to the emotional element. And though I still find Spock’s relationship a little unlikely (which was how I felt with the 2009 film), it was nice to get some human moments from Spock that helped lead up to later in the movie (“I choose not to feel…). 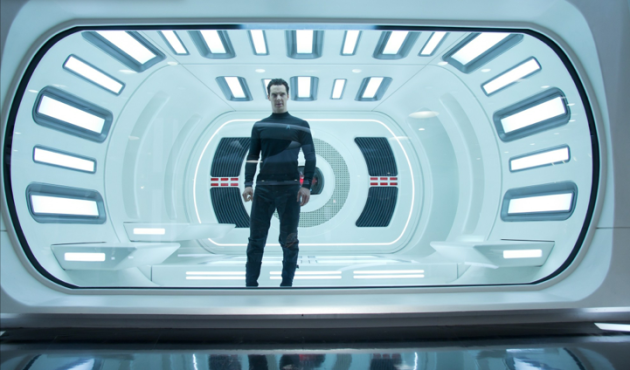 Have I mentioned that Benedit Cumberbacth was awesome as John Harrison/Khan? Because WOW, he was. Even if you are a Trekkie and know better than to trust Khan, it was easy to find yourself halfway wonder if there was any way this Khan might be different. But he isn’t! It’s true, he does love his crew like family, but he does not care about anyone at Star Fleet one iota. I find it kind of interesting that Star Fleet and Section 31 actually woke him up to work as an intelligence agent… and when I say interesting I am not sure if I mean that in a good way. It just seems unlikely, since they have banned genetic engineering after all. But who knows. Maybe they were truly desperate. But despite this, I thought he was a good villain, much stronger than Nero from the 2009 movie. 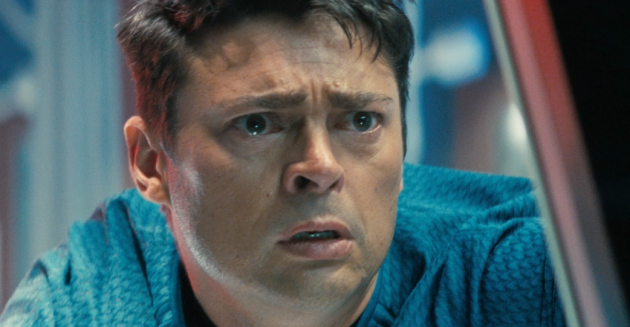 As mentioned before, Karl Urban as McCoy is my favorite of J.J.’s Enterprise crew. He just hits him dead-on without being just like DeForrest Kelley. It’s the perfect blend of new character with old character. I can’t say enough good things. 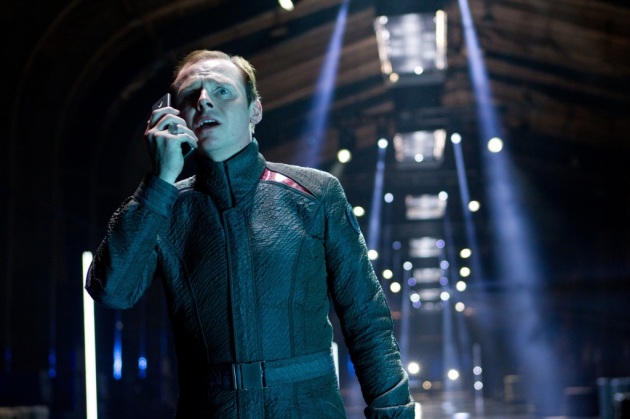 Simon Pegg as Scotty would probably be my second favorite. I really enjoyed him in the last movie and this one. 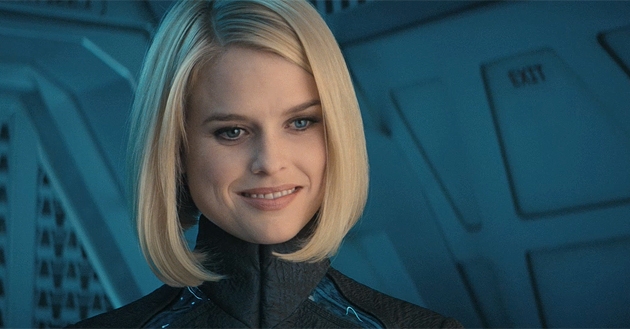 The rest of the supporting cast was great as well, though Sulu and Chekov’s air time was pretty limited (as my husband said when we talked about Sulu’s time in the movie: “at least he got to be Captain for a little while.”). Zoe Saldana as Uhura again portrayed her as a strong yet feminine character, and I felt Alice Eve did the same for new character Dr. Carol Marcus (well, new to this film because, you guessed it, Carol Marcus is also in Wrath of Khan). I wish we could have seen more of Marcus in this film, but hopefully we will in the future.

I enjoyed the story overall, and once I accepted the borrowed elements from Star Trek past, I embraced those elements and thought the new twists that were added all worked together nicely for this film. I love how the story opens feeling very much like classic Star Trek with bright colors and an alien planet, and then descends into a darker feel much more reminiscent of series Deep Space Nine and Enterprise. I felt the pacing was mostly on point, though the last maybe ten-ish minutes were a little off in some ways. I’m not unhappy with the ending, but it felt a little strange to have the big climax of Kirk dying, then this chase scene with Khan and Spock, and then have a wrap-up after Kirk is saved and the movie tries to quickly tie things up so much so that we leap forward to a year in the future so we can see a new Enterprise and be all set up for a third movie (or a new TV SHOW!!!! Which I want so badly, but due  to rights issues is not very likely to happen). I did love seeing Khan frozen again, with a hint of a smile on his face, and though before this movie I was not gung-ho for anymore Khan (despite how much I’ve told you to watch The Wrath of Khan I don’t entirely love it the way most Trekkies do), I DO like the concept a lot and I felt this movie did a lot for it, to the point where I would be completely happen to see a return in another movie. Though preferably a TV show. Sigh.

Oh, and I haven’t even mentioned the TRIBBLE! Watch “The Trouble with Tribbles” and “Trials and Tribble-ations” ASAP. You will thank me. 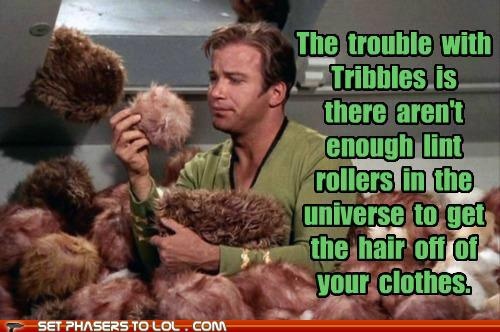 I think I’ve said enough now. So if you saw the movie, what were your thoughts? If you haven’t, what are you waiting for?!

Want to see what others thought? Check out these reviews too: